Once the global leader in producing a talent pool of college graduates, the U.S. is now losing ground to emerging nations like South Korea and China. Think about it: In 1990, the U.S. ranked first in the world in four-year degrees among 25-34 year-olds; today, the U.S. ranks 12th.

Access to higher education and affordability are two of the main reasons for that fall. The U.S. suffers from a college attainment gap, as high school graduates from the wealthiest families in our nation are almost certain to continue on to higher education, while only half of our high school graduates in the poorest quarter of families attend college.

Meanwhile, were losing out to Korea, Japan, Norway and even Russia. America: The Cost of Education

College costs for today’s students are a far cry from what they were for their parents. Hold your breath: The cost of higher education has surged more than 500 percent since 1985. In essence, a $10,000 education in 1985 would cost over $50,000 today. 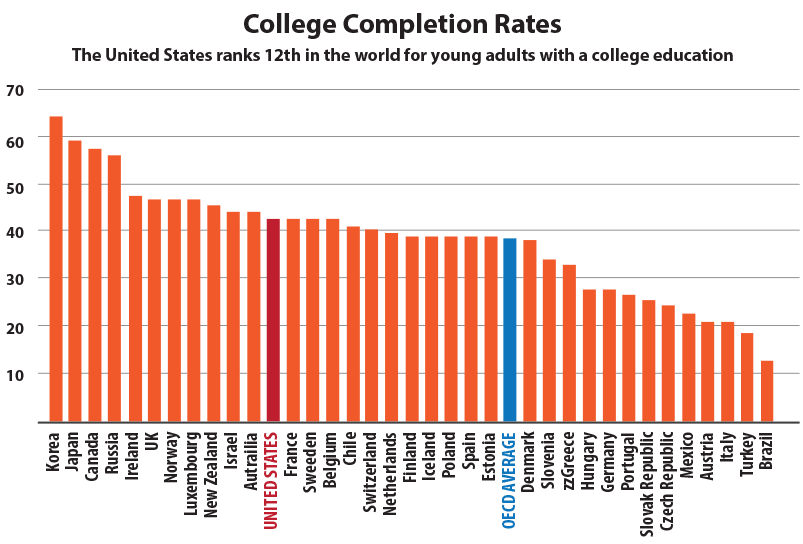 Look back even further and you’ll find the average cost of tuition and fees has risen dramatically over the course of the last 30 years. From 1984-1985 to 2014-2015 the cost of attending private four-year institutions has risen from $12,716 to $31,231, while costs for in-state students attending public four-year institutions rose from $2,810 to $9,139, a 146% and 225% increase respectively. During the same period of time the median household income in the United States has only risen $6,710, from $47,181 in 1984 to $53,891 in 2014. With these figures in mind, and barring the possibility of a family spending 58% of their yearly income on a single year of schooling, students inevitably turn to financial aid in the hope of finding some way to fund their higher education.
[Tweet “The cost of higher education has surged more than 500 percent since 1985.”]

Borrowing for Your Education

The inaccessibility of attending college for today’s youth is plainly visible if we only look at how much students are borrowing in order to afford attending. In 2012-13, $238.5 billion in financial aid was distributed to undergraduate and graduate students in the form of grants from all sources. From this, undergraduate students received an average of $13,730, including $7,190 from grants and $4,900 in federal loans, while graduate students received an average of $25,730 in financial aid, including $7,800 in grants and $16,240 in federal loans. In that same year students borrowed approximately $8.8 billion from private, state, and institutional sources.

Today the United States has over $1.2 trillion of student loan debt with 7 million borrowers in default. A 2014 study by Wells Fargo revealed that Four in 10 millennials are overwhelmed by debt. Germany is the polar opposite to the United States in terms of costs of higher education. Germany’s higher education system is entirely publicly funded and its 2.4 million students pay absolutely nothing in tuition fees. Tuition fees in Germany were originally abolished in 1971, though they made a brief comeback from 2006 to 2014, where they averaged at €500 ($630 USD). But due to massive unpopularity, they were once again abolished. Here are the top 7 places where Americans can study for free or at very low cost – and in English! Students just have to be willing to leave the country:

1. Brazil: Brazil’s universities charge registration fees, but they do not require regular tuition. Many of them also offer courses in English.
2. Germany: Germany has 900 programs in English, and is eager to attract foreign students to tuition-free universities due to the country’s shortage of skilled workers.
3. Finland: Finland doesn’t have tuition fees but the government does warn foreigners that they have to cover living expenses. Imagine going to college and only worrying about room and board.
4. France: France does charge tuition – but normally around 200 dollars at public universities. A far cry from what you’d pay in the United States, even in a state school.
5. Norway: Norwegian students, including foreigners studying in the country, do not have to pay any college tuition. Be forewarned, however, of the harsh winters and high cost of living.
6.  Slovenia: If Eastern Europe is more your thing, Noack notes that Slovenia has 150 English-language programs, and only charges a registration fee – no tuition.
7.  Sweden: Sweden, a country which has so successfully solved so many of its social problems that there are now U.S. TV programs about the glories of moving there, has over 300 English-language programs. Although college there is free, cost of living may be pricey for foreigners.

Free tuition doesn’t necessarily mean that students graduate without debt. In 2013, for example, Sweden’s approximately 900,000 students received roughly 20,5 billion Swedish krona ($2.5 billion, USD) in financial aid from their government, most of which came in the form of student loans. Students are considered adults and are expected to pay for rent, food, and other expenses in Sweden, without relying on their parents for money. Given the country’s high cost of living, taking available loans is often the answer. So, over 85% of Swedish students graduate with student debt despite their education costing practically nothing.

Though the United States isn’t alone in its struggle with student loan debt, the level of debt incurred by student borrowers in the U.S. is unmatched by their foreign contemporaries, to the point that the growth rate in student loan debt over the past decade outpaces all other types of consumer debt. Granted, the last few years have shown a slight decrease in the rate of college tuition inflation, but that’s not enough to halt the ever increasing gap of college accessibility plaguing the U.S.