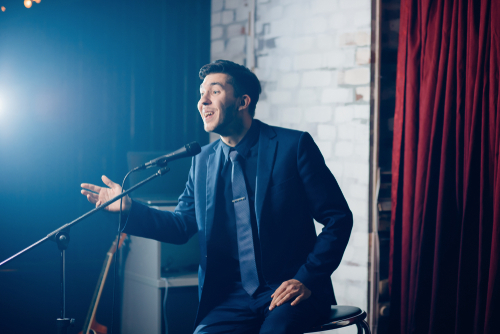 If you say you’re joining a comedic improv troupe, many people will look at you as though you’ve announced that you’re running away to join the circus. When that happens, puff your chest out proudly and inform them of the long and proud history that improvisational comedy has had in the United States—from vaudeville performers who would engage and interact with the audience all the way to the famous Second City improv troupe in Chicago (where folks like Tina Fey and Bill Murray got their start). Okay, so this probably won’t convince them, but you can walk away proudly, knowing that you are part of a comedic tradition that has been passed down from generation to generation like a well-worn rubber chicken.

Even those who shake their heads at you will admit that being a part of a college improv troupe sounds like a lot of fun. They’re typically small, tight-knit groups of a dozen people or less. They not only perform for student audiences on campus; they also get to travel and perform at festivals, tournaments, and locations all over the United States. While other students join sororities and fraternities, improv troupes have each other—a group of friends working tirelessly to improve their craft, always living for the next laugh from the audience.

While other students join sororities and fraternities, improv troupes have each other—a group of friends working tirelessly to improve their craft, always living for the next laugh from the audience.

If you travel throughout the United States, you’ll find a diversity of improv troupes at colleges and universities large and small. While some are loosely-organized and informal, the truly great ones demand a higher level of study and commitment from their members. According to Erik Voss at Splitsider.com, the members of Barren Mind (which performs at Arizona State University) create and perform a new 60-minute show each week. The Immediate Gratification Players of Harvard publishes So You Think You’re Funny?—its very own guide for serious students of improv. Northwestern University’s Titanic Players come from a college that features comedians such as Seth Meyers and Stephen Colbert among its alumni. Joining their comedy troupe is a 4-year commitment, as they audition and cast a new team each year…and that team will perform together until the entire team graduates.

Comedy as a Craft

If you become a dedicated member of a comedy improv team, perfecting your craft will become a real passion. Props and performance gear are often paid for by the performers themselves. Despite all of this, time spent in a college improv group is still perceived by many as a hobby—nothing more than a fun way to pass the time.

In an article from The New York Times Magazine, Professor Erin Schwall of Emerson College disagrees. She’s created a program where students can pursue a Bachelor of Fine Arts in comedic arts. Just as actors hone their skills in acting classes, Schwall feels that it’s important for students of comedy to learn how to relax, open up, and eventually—how to be funny.

For those that pursue comedy as a career beyond their college years, there’s never been a better time. The New York Times Magazine article also states “… we are currently in a comedy boom … in 2005, to use one metric, there were only 10 cable and prime-time scripted comedies on air, according to numbers tallied by FX Networks Research. By 2014 that number had risen to 84, and topped out at over 90 last year.” Americans, it seems, have an insatiable appetite for comedy, creating a real opportunity for those who emerge from college with a degree in comedic arts or years of experience in a comedy troupe. Although Emerson professor Martie Cook stresses that they are “not in the business of saying the most serious person on the planet is going to come to us and they’re going to be funny”, she has fought hard to prove to school administrators that a college comedy program is truly helpful.

Improv Looks Great on Your Resume; No Joke

That’s not just for students who are interested in a career in comedy, either. In order to be successful and get those laughs, they have to learn to work together as a team. Active listening and being able to adapt to communicating with different personality types is also a must for each and every member of an improv group. Since the name of the game is improv, the group never knows what’s going to be thrown at them. They have to be able to work together as a well-oiled machine. Individuals who emerge as the head of their group will have the opportunity to develop their leadership skills. This is why there are improv classes being taught to leadership teams at companies all over the country. Smart businesses recognize the value of improv in helping high performers with listening, communication, flexibility and risk taking. That’s also why many of the country’s top business schools like MIT and Stanford teach improv classes.

For those whose dreams lie in entertainment and those who are simply interested in improv as a way to meet friends and pass the time, the most important benefit may be embracing your ability to fail, fail, and try again. As The New York Times Magazine journalist Luke O’Neil writes:

“A college education of any kind is no longer the guarantee of gainful employment it once was, and no student today thinks she’s graduating into a fixed career path. But a comedy career, more so than most others, is a series of ad hoc improvisations and recoveries from repeated failure. A degree like this seems designed to ensure that when they do end up falling, there is a network in place to help students get back on their feet.”

Whether your goal is to one day have your own show on Comedy Central or to be the executive chef at a Michelin-starred restaurant, you have to know how to fall flat on your face and be willing to dust yourself off and keep charging ahead. There is perhaps no better way to learn this than the trial-by-fire that is comedic improv.

Emerson College is the first in the nation to offer a degree in comedic arts. However, if you don’t go to Emerson there are plenty of other ways for you to develop your comedic chops and gain experience. You can even start your own improv group if you don’t find one to join.

You can also register for performing arts classes. You’ll learn a lot about the nuts and bolts of performing, from memorization and projecting your voice to what goes on behind the scenes to make a performance happen. One really important benefit to these kinds of classes? They’ll help you become more comfortable being onstage in front of a live audience. This is especially critical when you’re doing comedy improv and don’t have a script to fall back on. Much of your work is going to feed off of the audience.

The next (and most obvious) step is to join your school’s comedy troupe. Whether you’re new to performing comedy or have had experience with past groups, you’re sure to learn a lot. College comedy troupes are also a great way to network and meet other people in your local comedy/acting community.

Ask around and find out when your school’s comedy improv group are holding auditions and go try out. Take a deep breath and go for it. Make sure you’re well aware of what the expectations will be so you can prepare.

If your college doesn’t have a comedy troupe, there’s still a chance for you to perform while you save money to move to a comedy mecca like Chicago, Los Angeles or New York City. There may be comedy groups in your city that are accepting new members. Most areas have performance venues with open-mic nights that feature a variety of acts.

Keep an eye out for comedy festivals and competitions. No matter where you live or what you’re currently involved in, always take time to work on your craft. Write, perform, and pay attention to what gets laughs. There are a variety of comedy competitions and festivals for you to attend in order to compete, practice, observe/learn, and make new friends. These events are held around the country throughout the year, so wherever you live, there’s sure to be one you can attend.

The great thing about comedy is that it’s something that everyone can get involved in. Whether you’ve been performing and wowing audiences for years or have yet to set foot on a stage, the community of comedic performers is likely to welcome you with open arms. The only thing you need to have is an open mind and a willingness to make a fool of yourself. After all, that’s how the best laughs happen.